Why do Dogs Lick Your Nose? Let’s take a look

Dogs licking their owners’ noses is one of the most common behaviours seen in domestic dogs. In fact, it is so common that it has even become a cliché in popular culture. But why do dogs lick noses? What is the purpose of this behaviour?

It is also possible that dogs lick noses as a way to explore their environment. Dogs have an incredibly sensitive sense of smell and licking can be a way for them to investigate their surroundings. This could explain why dogs often lick areas of their owner’s face and body that contain the most scent, such as the nose and ears.

Finally, it is possible that nose licking is simply a sign of dominance. Dogs are pack animals and they often use licking as a sign of submission. When a dog licks its owner’s nose, it could be seen as an attempt to show the owner that it is the dominant animal in the relationship.

The best way to deal with any nose licking behaviour is to keep an eye on your dog and ensure that it is not showing any other signs of aggression or dominance, especially around food. If your dog is simply licking your nose out of affection, then you can be sure that it is an expression of love and not a sign of aggression.

Is it safe for a dog to lick my nose?

It is a common question for pet owners to wonder if it is safe for a dog to lick their nose. The answer depends on the individual pet, the environment, and the owner’s comfort level with the behaviour.

On the one hand, a dog’s mouth and nose are exposed to dirt and bacteria, and licking can spread these germs to humans. On the other hand, dogs lick to express affection, and some owners may enjoy the gesture as a sign of love. Here is a look at the potential risks and benefits of allowing a dog to lick your nose.

The main concern with allowing a dog to lick your nose is the potential for infection or disease. Dogs have bacteria in their saliva that may be harmless to them, but can cause illness in humans. This includes common illnesses such as colds and flu, as well as more serious diseases like salmonella or e. coli. In addition, dogs often lick their own noses, which can introduce additional bacteria from the dog’s environment, and may even contain parasites like hookworms or roundworms.

Another potential risk of allowing a dog to lick your nose is the possibility of an allergic reaction. Dogs can carry allergens, such as pollen, dust, and dander, on their fur and in their saliva. These allergens can trigger an allergic reaction in some people, causing runny noses, sneezing, itching, and hives.

The primary benefit of allowing a dog to lick your nose is the expression of love and affection. Dogs have evolved to show their affection in various ways, and licking is one of the most common. A dog licking your nose is a sign that they are comfortable and content with you, and that they feel safe and secure.

Whether it is safe for a dog to lick your nose is ultimately up to the individual pet owner. Potential risks include the spread of germs and allergens, while potential benefits include the expression of love and bonding. The decision should be based on the pet’s health, the environment, and the owner’s comfort level with the behaviour. If the owner is comfortable with the pet licking their nose, it can be a pleasant way to express affection and build a relationship with their pet. 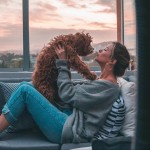 Pupperville.net is a website ran and dedicated by Dog Lovers. We review dog products and provide useful guides & how-to’s on how to look after your Pupper!

Social menu is not set. You need to create menu and assign it to Social Menu on Menu Settings.